When one thinks about Thai movies, Mr Tony Jaa springing around smashing baddies comes to mind. But the next thing that pops up would probably be the internationally-acclaimed horror flicks like Shutter and more recently The Coffin. My local friend tells me that the reason why Thai horror stories are so real and spine-tingling is because they are created by people who have genuinely embraced the idea of ghosts for many generations. 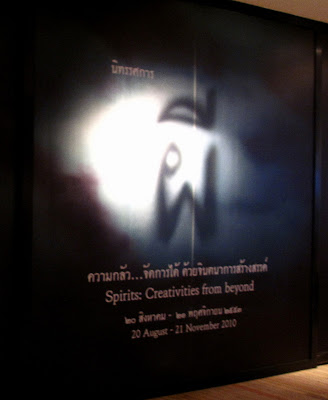 Which brings me to my point of this post. There's this small exhibition hall (called TCDC) on the top level of the Emporium in Sukhumvit which never fails to mesmerize me. This year, it has held a showcase for Japan's dying art of bamboo weaving, followed by introducing Thai creative design commercial products to the public. This time, it took things up a notch and transformed itself into a creepy spiritual realm.

I brought Li Li and my mom here with a casual mindset. To me, it was supposed be a day of fun at an upscale shopping mall with a walk through the interesting exhibition followed by chilling out at a chic restaurant with some wicked Italian food. However, the organisers really caught us cold. Beyond that sliding door you see above is complete darkness, so dark that I did not dare to step forward. It was like something would appear and scare the crap out of us at any instant. Anyway, with some difficulty, I eventually led the 2 ladies through 2 turns in the darkness before a decent amount of light greeted us again. 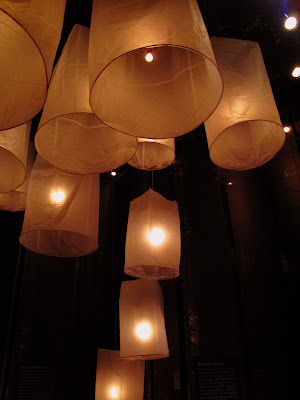 The first part of the displays was really ok, perhaps they were warming us up before the real thing came. This was the only section where I could bring myself to snap some pictures. 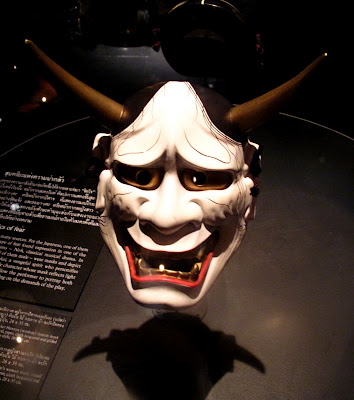 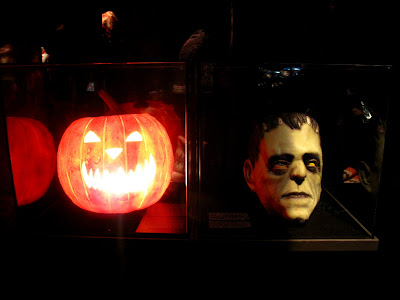 The exhibition ended with a section with all the mystic Thai spirits, which were so freaky I did not want my camera to have anything to do with them. Imagine a lady's head with flowy long hair and only her internal organs (a flashing beating heart and intestines included) hanging off her neck. Worse thing is, she was floating around in circles in the room, catching people by surprise, resulting in an exhibition littered with shrieks of fright. I attempted to look for this particular's pictures online to put on this post, but I gave up prematurely as the images spooked me out again, sorry guys. If you are really interested, please google Kra Sue and see what you get. Much sympathy is offered to the security guard at the exhibition who was dedicated to follow Kra Sue on her journeys to ensure no one got hurt.

There was really an element of relief when we finally stepped out of the showcase, where we were greeted by a DIY desk, and guess what they were teaching kids to make... 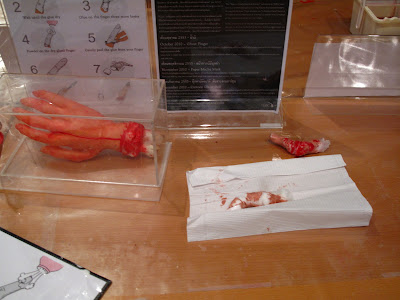 A BLOODY SEVERED FINGER. Come on, give me a break!

Email ThisBlogThis!Share to TwitterShare to FacebookShare to Pinterest
Labels: Tourist? I would come here if I were you

A quiet 2 weeks on the blog front for me. My wife is here with my mom, who went back to Singapore to celebrate my niece's first month yesterday. I finally have some time to breathe. Wasn't easy trying to juggle working while keeping my mom entertained in a country where she cannot even find 1 TV channel with programmes she could really understand. She resorted to day-after-day of shopping therapy to curb her boredom, but anyway, I hope she enjoyed herself. I am just dropping by to say hi to my dwindling number of readers in case you are wondering what happened to me.

Last Saturday was Chulalongkorn Day (King Rama V of the Anna and the King fame), and I took the opportunity to re-visit the Grand Palace, this time with my mom. Although she would enjoy herself infinitely more bulleting around like a high-speed train in the Ratchaprasong shopping district (where the red shirts proudly occupied for a couple of months a while ago), I think the visit wasn't too shabby as well. Please have a look at the Grand Palace pics on my FaceBook profile here.

On a personal note, I got my company and I a new toy to play with, a mini photo studio! Just the thing I need to take nice pictures of the countless spare parts we sell (without any knowledge of how to set up a real photostudio myself), and I can conveniently use to take any knick-knacks I have too. I am pleased. 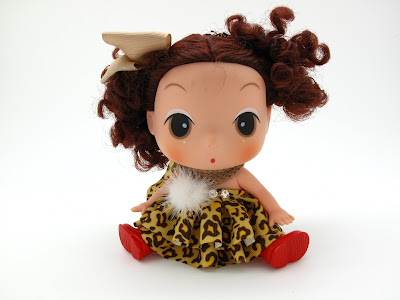 Here's a preview of the picture the studio can produce, with a G10, with no photoshop at all. Anyone needs studio-quality pictures of small products for your marketing material? Courier it to Bangkok and I can help you!
Posted by Eddie Yii at 9:34 AM No comments:

Email ThisBlogThis!Share to TwitterShare to FacebookShare to Pinterest
Labels: My Strangest experiences in Thailand

The Stranger's first experience of a Cosplay Extravaganza

Sorry my dear niece, a lot of blogging ideas welled up in my mind today after some mental block, so you can only be at the limelight of my blog for a couple of days. It's been too long since I talked about something interesting in Bangkok, I shall do it now before my audience start knocking my door requesting me to change my blog title!

After giving a raving review of Paradise Park, I think I should do Seacon Square some justice. Seacon Square is the mall that has served me well over the past year, being only a short walking distance away from my dwelling. Also, it is currently the 2nd largest mall in Bangkok after CentralWorld (with the burnt-down-but-reopened fame). To give Seacon Square some credit, it's been going strong amidst the immense challenge from Paradise Park just 200m down the road, and over the past months, it has organised event after event in its huge foyer to keep customers interested.

This week, it got even more exciting!

To be honest, I do not have any idea what Cosplay is all about. I only know that there will be people dressing up like Japanese comic book characters and people queueing up to take pictures of them, so I just grabbed my G10 and strutted over to take a look. After walking around experiencing the whole Cosplay excitement, I am proud to say that my theories about Cosplay is largely accurate, however, there were a few revelations:


Ok, I think I should get to the things you are interested in and show you some pictures. I have arranged a montage as well as 2 of my favourites: 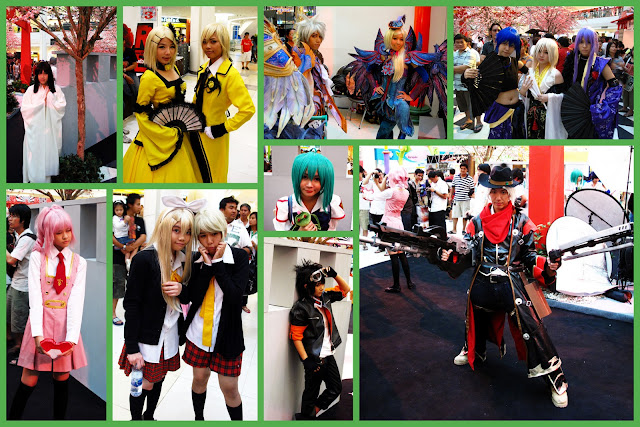 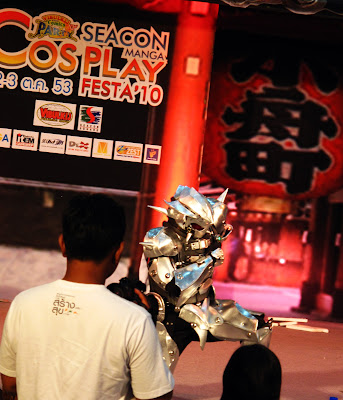 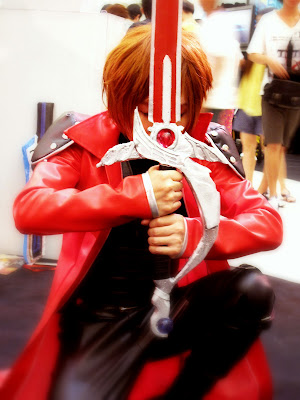 Well, I have more. I took some pictures of the cutest looking character and I wouldn't keep them from all my dear readers. 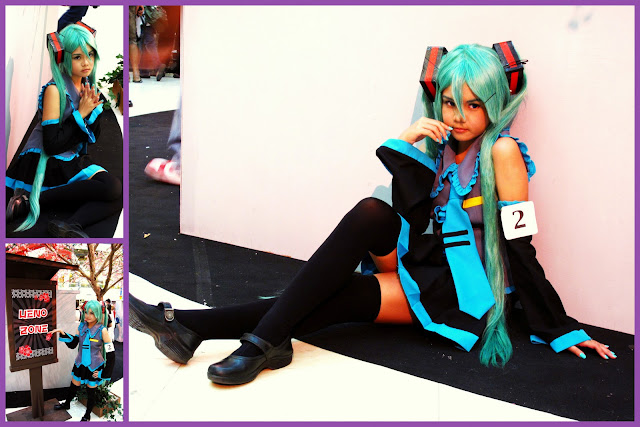 I had a good time. I hope Seacon Square hosts the next Cosplay Festa as well, in the meantime, I will look forward to the up-and-coming National Cheerleading Competition!
Posted by Eddie Yii at 12:30 AM No comments:

Email ThisBlogThis!Share to TwitterShare to FacebookShare to Pinterest
Labels: My Strangest experiences in Thailand

Greetings from Uncle in Bangkok

Firstly, I have to apologise that for the past weeks, there has been nothing interesting happening in Bangkok itself for me. After my wedding, it's just been ceaseless amounts of work and mounting problems in the office to take care of. Shilei did make a brief visit to pick my mood up a little, but that's about it. Things will not get much better, as I will soon need to start renovating my new warehouse and welcome my company's peak season all at the same time.

On a personal note, September 2010 had been one of the most happening months in my life. After turning 29 on the 7th with my church guys and Candra by my side, I had back-to-back wedding banquets on the 11th in Singapore and on the 18th in my native Kuching. I think this effectively gives me the title 老公, which sounds unbelievably old in any sense.

However, things just do get better and better don't they? Rather unexpectedly, I officially became an UNCLE (叔叔）on the 29th, when I only expected the arrival of my long-awaited niece early this month. I scoured around on FB and I have not seen any pictures of her online yet, so.... you've seen her here first, thanks to Li Li!

I have enough new old-sounding titles on my head all of a sudden, no more please, just for a while yeah? I'm turning 30 soon, just let me savour the last bit of my youth ok?
Posted by Eddie Yii at 11:11 PM No comments:

Email ThisBlogThis!Share to TwitterShare to FacebookShare to Pinterest
Labels: The simple pleasures of life, When I visit back home
Newer Posts Older Posts Home
Subscribe to: Posts (Atom) 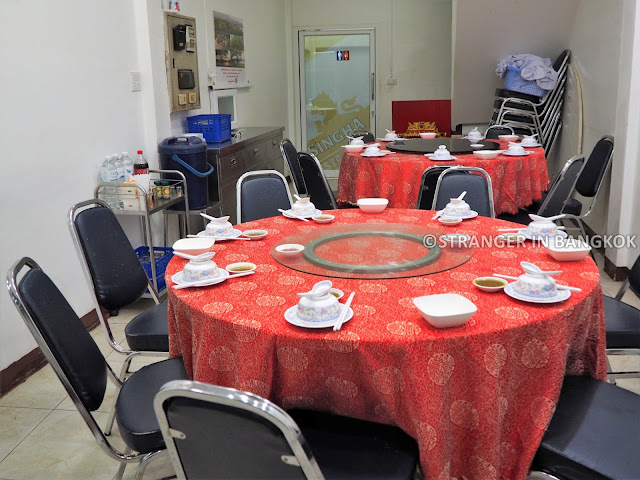